Remote Viewing meditation #12 - the pyramids of the Moon

Friday August 25, 2017 11 pm est - listen to the meditation here - you can also listen to the archives at the same link.  Please remember to leave your impressions on the Blog 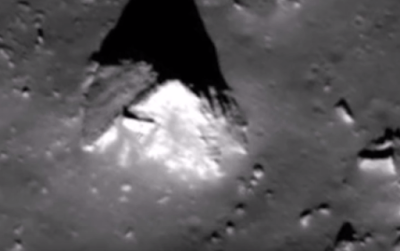 There is a great deal of debate as to whether or not we went to the moon and/ or whether or not there are pyramids on the moon.  It is up to the individual to research and then make their own decisions . 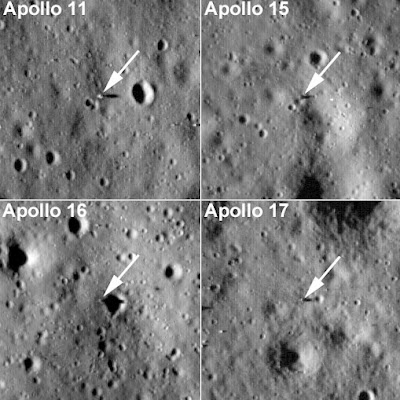 When humans first set foot on the Moon, a new age dawned upon us.  We were no longer limited by our planet and at the same time, everything felt so small compared to the scale of the universe.  But there are many who believe the moon landing never happened.

So, has our species really made it to the Moon, or could this be a hoax of lunar proportions?  Both theories have gathered numerous supporters.  On one side, there are hundreds of hours of footage proving the Apollo flights were real, while on the other, conspiracy theorists have brought different arguments showing the landing might had been staged.  But what if both theories are correct?  And, could the lunar surface hide more than just rocks and craters?

Discovering pre-existing moon structures would be a good reason not to reveal their existence to the general public.  If an official report admitted that such buildings were found on the Moon, then our faith would probably take a twisted turn, and we don't want such brisk change, don't we?

Those who claim the Moon landings were faked in a studio believe there is little authentic color footage from the missions.  Although NASA recently made public high-resolution photos from the Apollo missions, skeptics still stick to their part of the story since the anomalous designs found on the Moon are nowhere to be found in official photos nor videos.

Many photos are altered, edited or blurred in order to hide critical information.  Likewise, the famous case of the Apollo 11 missing tapes does little to calm the storm of criticism.  An investigation concluded approximately 20 years ago found NASA had erased and reused the tapes containing the raw, unprocessed Apollo 11 video.

Although the lunar mission audio log had been heavily altered, it still reveals an intriguing piece of dialogue which occurs near the end of the first extravehicular action of the Apollo 17 mission, the last official mission of Earth's natural satellite.  While returning to the Lunar module, astronaut Eugen Ceman witnessed something incredible that can be interpreted from his dialogue :

"HEY, WHAT ARE THOSE THINGS GOING OVER? WHAT IS THAT, JACK?  HEY! SOMETHING JUST HIT HERE!"

Please leave your observations and insights below...share what you got. 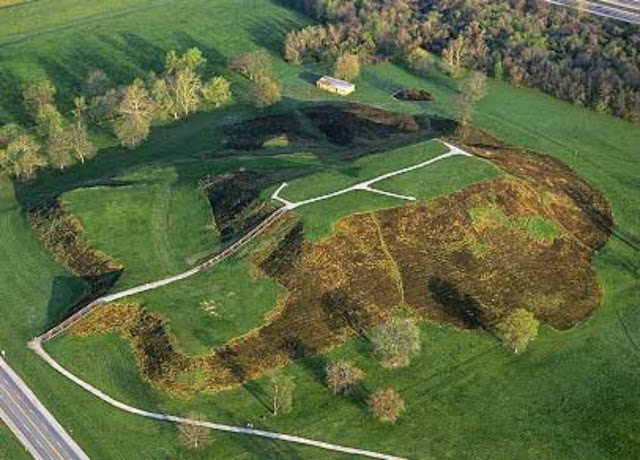 Of all ancient civilizations in North America, human hands have built no greater earthwork than the Monks Mound near East St. Louis, IL. The Mound Builders statesmanship, ambitious projects and workforce make them of the most important cultures of World history. Monks Mound is situated about a mile from the Mississippi River, just north of East St. Louis, Illinois, in central United States.

The expertise of the ancient engineers that built the mound is shown through a complex layering of materials to build it. Inspection of the construction sequence of Monks Mound reveals that the final size and shape was part of a highly developed plan. All carefully layered stages of construction proceeded quickly as shown by a complete absence of erosion or layers of vegetation found between layers.

Construction materials for Monks Mound included only colored soil that is not found in the surrounding alluvial floodplain. The location of origin of the colored soil used in the construction of Monks Mound is now being researched. Soils were likely selected for their vivid color and brought in on rafts or on foot from hundreds of miles away. The blue, red, white, black, grey, brown, and orange soils colors were layered in varying thickness and areas throughout the mound’s entire construction. Historian Rick Osmon stated “the Blue soil is very rare and is known to come from Clay County, Indiana and white soil may be gypsum powder, which is found in northern Indiana. Red and orange soils come from southern Appalachian areas.” The energy required to move 43.1 million baskets a great distance construct the mound is staggering. 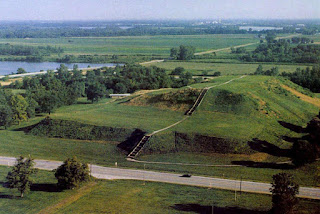 Perhaps these colored layers contained elaborate earth paintings. The striking colored mound covered with colored painted images would be most appropriate for this type of structure. The paintings may have been similar Hopewell style birdman form or painted images similar to the Birdman tablet found at the site With the destructive excavation methods used, we will never know for sure if the destroyed layers contained imagery that archaeologist refer to as the “Southeastern Ceremonial Complex”.
Formative cultures required vast amounts of energy to labor in mound construction events which was obtained by hunting wildfowl, deer and other animals. Hunting evidence equates to finding spears and projectile points. Local lithic styles have been useful in determining formative phases at Cahokia Mounds. Generally, the projectile styles equate to time periods based on the depths that they were found in excavations. Styles found in the Cahokia Mounds region include Paleo, Archaic, Woodland, and Mississippian. Interestingly, when quantities of projectile points are plotted by time, a trend is shown that indicates cultures flourished and collapsed at least three times throughout the Holocene.

Monk’s Mound is in the ruins of the ancient Native American city of Cahokia in the U.S. state of Illinois. At its height, about 1,000 years ago, Cahokia was home to as many as 15,000 people. The mound was a series of rectangular terraces that reached 10 stories or 30 meters (100 feet) in height, and the area of its base was larger than the Empire State Building in New York City. The structure had a large public building at is apex, perhaps a temple

Please remember to leave your comments and expressions. 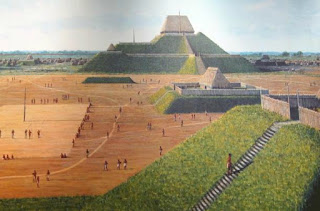 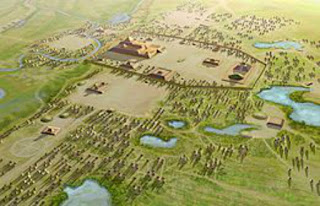 Remote Viewing #10 - Tomb of the First Emperor of China 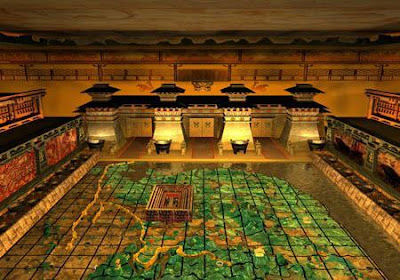 This is going to be an interesting meditation…there is info on the site if you are interested in its history plus some video’s that fill you in on a bit more.  Please remember to leave your impressions on the Blog so that we can all share what we have experienced.  If you haven’t done all of the meditations feel free to leave your comments on them as well, all of the links to the meditations are on the blog also.  Thanks for sharing your time with us. 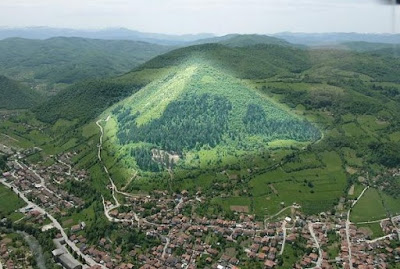 The Mausoleum of the First Qin Emperor,  is located in Lintong District, Xi'an, Shaanxi province of China. This mausoleum was constructed over 38 years, from 246 to 208 BC, and is situated underneath a 76-meter-tall tomb mound shaped like a truncated pyramid. The layout of the mausoleum is modeled on the Qin capital Xianyang, divided into inner and outer cities. The circumference of the inner city is 2.5 km (1.55 miles) and the outer is 6.3 km (3.9 miles). The tomb is located in the southwest of the inner city and faces east. The main tomb chamber housing the coffin and burial artifacts is the core of the architectural complex of the mausoleum.
The tomb itself has not yet been excavated. Archaeological explorations currently concentrate on various sites of the extensive necropolis surrounding the tomb, including the Terracotta Army to the east of the tomb mound.[2] The Terracotta Army served as a garrison to the mausoleum and has yet to be completely excavated. 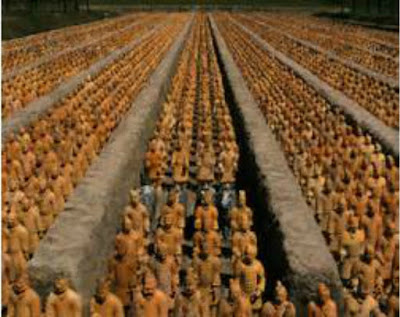 Work on the mausoleum began soon after Emperor Qin ascended the throne in 246 BC when he was still aged 13, although its full-scale construction only started after he had conquered the six other major states and unified China in 221 BC. The source of the account of the construction of the mausoleum and its description came from Sima Qian in chapter six of his Records of the Grand Historian, which contains the biography of Qin Shi Huang.

In the ninth month, the First Emperor was interred at Mount Li. When the First Emperor first came to the throne, the digging and preparation work began at Mount Li. Later, when he had unified his empire, 700,000 men were sent there from all over his empire. They dug through three layers of groundwater, and poured in bronze for the outer coffin. Palaces and scenic towers for a hundred officials were constructed, and the tomb was filled with rare artifacts and wonderful treasure. Craftsmen were ordered to make crossbows and arrows primed to shoot at anyone who enters the tomb. Mercury was used to simulate the hundred rivers, the Yangtze and Yellow River, and the great sea, and set to flow mechanically. Above were representation of the heavenly constellations, below, the features of the land. Candles were made from fat of "man-fish", which is calculated to burn and not extinguish for a long time. The Second Emperor said: "It would be inappropriate for the concubines of the late emperor who have no sons to be out free", ordered that they should accompany the dead, and a great many died. After the burial, it was suggested that it would be a serious breach if the craftsmen who constructed the mechanical devices and knew of its treasures were to divulge those secrets. Therefore, after the funeral ceremonies had completed and the treasures hidden away, the inner passageway was blocked, and the outer gate lowered, immediately trapping all the workers and craftsmen inside. None could escape. Trees and vegetations were then planted on the tomb mound such that it resembles a hill.
— Sima Qian, Shiji, Chapter 6. 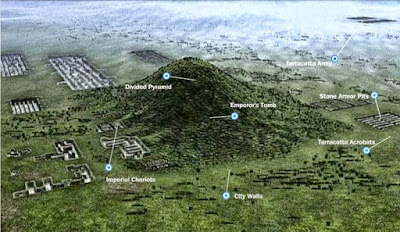 Some scholars believe that the claim of having "dug through three layers of groundwater" to be figurative. It is also uncertain what the "man-fish" in the text refers to, interpretation of the term varies from whale to walrus and other aquatic animals such as giant salamander. Before the Mausoleum of the First Qin Emperor was completed, a peasant rebellion broke out during the late Qin dynasty. Zhang Han redeployed all the 700,000-people building the mausoleum to suppress the rebellion, so the construction of the mausoleum ceased. After Xiang Yu entered Xianyang, he is said to have looted the tomb. Afterwards, it is said that a shepherd unintentionally burnt down the underground palace of the mausoleum. The story goes that he went into a cave of the mausoleum, dug by Xiang Yu, to look for his sheep with a torch in his hand, and a fire was started, burning away all the remaining tomb structures. No solid evidence of this has been found, and some scholars think that the mausoleum did not suffer any large-scale destruction.
In 1987, the mausoleum, including the Terracotta Warriors, were listed as World Heritage Sites. 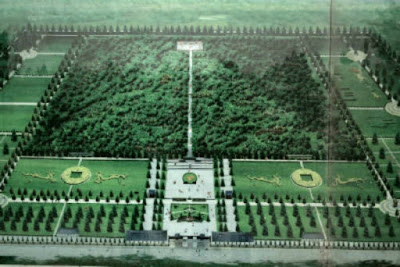 If you are interested in more information on this site look at the you tubes below:

After the meditation please visit the blog and leave your comments, feelings, insights, or experiences
Posted by Unknown at 8:17 PM 4 comments: